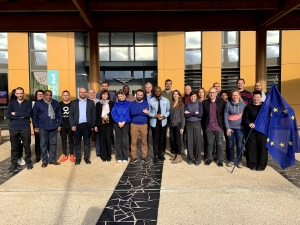 This preliminary meeting served as the first contact among the partners. Specific details of each project workshop were decided and several local entities shared their experiences of integrating vulnerable people.

‘Futbolmas’. Works on creativity, responsibility, teamworking, team spirit and resilience. There are 5 programs in neighbourhoods, schools and elsewhere in the city. In Grigny, they are working with children in relation to positive attitude, gender equality, children’s rights and peace in the community. Activities are in 2 neighbourhoods and 8 schools with 55% of the participants being girls. Great importance is placed on girls having access to football. In order to focus on and adhere to the objectives, twice a year games are organised between different areas where the project is based.

Grigny USG Handball Club. A Framework for sports at school was devised by the department committee and there was a willingness to create a handball ‘Sports Academy’ . The Alpha section was then created as part of the ‘Grigny Sport Union USG’ in June 2017.

The ‘Sports Academy’ was created during the first season of 2017-2018 and it gathered together many sports for three training sessions per week. At that time the membership was 100% girls. Now, they have 35 licensed members of which 31 are girls, a girls under 18 team and an under 11’s mixed gender team.

The strength of the Handball section is the combination of both a social and sporting approach.

Another project is ‘Handfit’ a health and well-being sports activity.

Social support is also being developed with the hosting of interns and a network of young girls who are looking to participate in internships: meeting through sport has opened doors.

The ‘Savoir Nager’ association. The Grigny swimming pool was built in the early 1970’s as part of the French State’s national ‘1000 pools’ plan. This initiative aimed to make learning to swim accessible throughout the nation.  The Grigny pool has never deviated from this original objective. In Grigny, children learn to swim at successively greater depths, without ever using flotation equipment.

In terms of youngsters who have learnt to swim, the results of ‘Savoir Nager’ have stabilized at the level of 35% of Grigny’s young people by the end of year 6 (first year of middle school).

As a consequence of being furthest from the pool (coincidentally the most socially precarious populations of the city) a percentage of youngsters were less likely to learn to swim.

The ‘Zero Non Swimmer’ project was born in 2011 with the goal of introducing large numbers of children to the sailing and kayaking activities in Grigny . The dual goal was to foster educational continuity between schools and leisure centers.

The ‘Zero Non-Swimmer’ project has two components. Each schoolchild who follows their elementary schooling in Grigny goes to 30 swimming sessions of 30 minutes between CP and CE1 and 48 sessions of 40 minutes from CP to CM2. The ‘Zero Non Swimmer’ project’s extended component consists of children aged 6 to 11 continuing to learn to swim in collaboration with several partners who come to the swimming pool:  the city’s schools and colleges, sports clubs and neighbourhood groups.