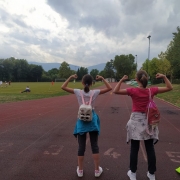 NGO “Marathon” Sarajevo, within the Erasmus+ project Sport!Op! and in collaboration with SOS Children Village BiH and Athletic club Novi Grad, implements activities which use athletics as a tool to promote and develop social inclusion of children without parental care. But what are the fundamental improvements which benefit better social status of these children? Taking into consideration the fact that children without parental care often deal with different forms of life traumas and therefore are “overwhelmed with feelings of abandonment, rejection, worthlessness, guilt, and helplessness which leads to depression and anxiety” (Folman, 1998), it was natural that we, as an NGO which organizes running school and running activities in the local community, try to pay attention on those negative emotions and try to influence them through sport.

Studies show that individuals who engage in light or intense physical leisure activities have lower rates of depression, anxiety or comorbid depression-anxiety. It is shown that the intensity of physical activity does not appear to be important but the activity itself is what produces positive effects. (Physical activity and common mental disorders, Cambridge University, 2018).

Furthermore, the researchers investigated possible factors influencing the link between physical activity and common mental disorders and identified 3 key factors of which the social factor (number of friends and social activities) stands out as the most important in moderate reduction of mental disorders.

According to the analyzed results, factors such as social support and social engagement may partly explain this relationship between physical activity and the reduction of symptoms of depressive disorders.

According to the Evaluation of the Recreational Racing Club in 2017, almost all participants who completed the running school program and participated in the final sports event, expressed greater satisfaction with their quality of life, and thus the improvement of their general psychosocial condition.

Guided by the previously mentioned research and by good examples of programs for the implementation of social inclusion based on sports in public running schools, NGO ‘Marathon’ Sarajevo started activities with the aim of improving children’s physical fitness, social skills, position in the local community and general mental state (which had been disturbed by life traumas they had been through).

Enes Hatibović- Child Development Associate working in “SOS Children’s Village Sarajevo” said that he noticed significant improvement in general behavior and positive thinking of children involved in the project. He reported the positive results of activities, particularly the fact that organized training enabled children and young people to develop their social skills, sense of belonging to the group, their mental and physical abilities and a competitive spirit and love for sports. Furthermore it enabled them to adopt work habits and respect rules.

All the above mentioned contributes to raising children’s self-confidence, positive self-perception, which ultimately produces better social acceptance and involvement in both the local and wider community.

After several months of training, significant progress was seen within the group of children who took part in project activities. Most noticeably in respect for group rules and authority, responsibility, a raised level of concentration, discipline, communication quality and clear expression of personal states and feelings.

These results achieved show that the Sport! Op! project activities carried out in Sarajevo, BiH undoubtedly join a number of good practices which confirm the connection between physical activity and its positive impact on common mental disorders. Moreover, there is an improvement in the quality of life and personal self-perception as a valued member of society, thus reducing the risk of developing anxiety and depression disorders.

As said by Selma Kukić- NGO “Marathon” Team leader: “Research and examples of positive practices are the starting point for each of our activities. However, the satisfaction of the children which can be seen during the training we organize, the attitude they have and the pride and smiles they share when mastering each exercise, are what confirm the ultimate goal of the project in a more honest, simple and convincing way than any statistics”.

Want to join the discussion?
Feel free to contribute!

Sport!Op! works on the creation of a methodological handbook for social inclusion...